EURoma relaunches its activities in the 2014-2020 programming period 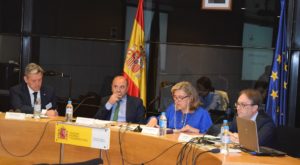 On 6-7 June the ‘European Network on Social Inclusion and Roma under the European Structural and Investment Funds’ (EURoma Network), held its first meeting of the current programming period in Madrid. With the Spanish partners as hosts, the meeting brought together public bodies responsible for European Structural and Investment Funds (ESI Funds) and for policies targeting the Roma population from twelve EU Member States, as well as representatives of the European Commission.

This meeting is the first activity of the EURoma Network in the 2014-2020 programming period and gives continuity to the eight years of common successful work during the 2007-2013 period to contribute to improve the use of ESI Funds for the promotion of the social inclusion, equal opportunities and the fight against discrimination of the Roma community (see latest EURoma Network report ‘A glance at EURoma’s eight years of work and how Roma inclusion is considered in the 2014-2020 programming period’

The second day, partners had the opportunity to learn about the Spanish context and some ESI Funds funded initiatives that could help identify elements for successful investments and for future transnational cooperation.

The Euroma network was launched in the ESI Funds previous programming period with the aim of contributing to improve the use of ESI Funds for the promotion of the social inclusion, equal opportunities and the fight against discrimination of the Roma community.