European Parliament adopted a report on Access to Decent and Affordable Housing for all, recommending measures to Member States and European Commission 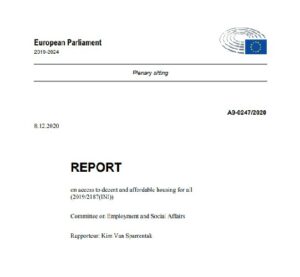 As stated in the European Pillar of Social Rights, and facing a raise of 70% in the number of homeless people in the European Union in the last ten years, the right to affordable, accessible and decent housing should be prioritised in this programming period.

Roma population is severely affected by unequal housing conditions, segregated neighbourhoods, lack of access to basic services and public policies, especially for non-sedentary Roma. Following the recent European Framework for Roma Equality, Inclusion and Participation 2020- 2030, housing should be addressed by Member States as a priority.  National Strategic Policy Frameworks, due by September 2021, should set indicators and monitor improvement in access to basic services such as running water, and reducing overcrowding and house deprivation.

This recently adopted report, encourages Member States to increase public investment to eradicate homelessness and house deprivation by 2030. European Funds planning, through both ordinary resources as the Multi Annual Financial Framework and extraordinary resources from Next Generation Recovery and Resilience Plan, should prioritize right to decent housing focusing on vulnerable population such as Roma.

ERDF allows expenditures on housing investments via its Specific Objective 4.3 Increasing the socioeconomic integration of marginalized communities, migrants and disadvantaged groups, through integrated measures including housing and social services.

ESF+ through its Specific Objective (viiiia) Promoting socio-economic integration of marginalised communities such as the Roma can complement targeted and mainstreamed measures to reduce house deprivation, spatial segregation and poor access to services.

Moreover, the additional funding through NEXT GENERATION EU will encourage Member States to invest on zero emission policies by increasing ihousing renovation and energetic efficiency. Those policies to be addressed by the Recovery and Resilience facility should put vulnerable communities at centre, and as the report states, ensure decent housing meeting WHO standards on housing temperature and air quality regulation.

During the last ten years, the number of homeless people within the EU has raised 70%, and over 4% of the European Population suffers severe house deprivation. The report urges the Commission and Member States to take active measures to guarantee the access to decent and affordable housing for European Population through investment, transparency and fight against discrimination.

Enforcing the Racial Equality Directive and launching infringement procedures against Member States that criminalize homeless people are key measures. Alignment of national housing strategies with anti-poverty strategies, considering child poverty allow ensuring that people and their rights are being at the centre of public policies.

Within the European Region, there coexist multiple options to confront lack of housing. However, social, public and cooperative housing is less prevalent and housing access is more insecure in Southern and Eastern Europe. When planning European Cohesion Funds such as ERDG, ESF+, Just Transition Fund or Next Generation EU, Member states should increase investment on social housing and fight homelessness and use the resources for fostering social cohesion through urban planning.

European funding offers an opportunity in the right timing. Country specific recommendations and European Semester should include measures to ensure the right to decent housing through measures such as rent control, price transparency, long term rental contracts as default option and tenants and owners protection from eviction.

Recovery Plans to be undertaken by Member States with European funding during the next six years are encouraging a productive model transformation towards greener and smarter economy. Investment on housing renovation, energy- efficient buildings, fight against energetic poverty and ensuring decent housing complying with WHO’s standards, focusing on vulnerable population. The household income dedicated to housing should not exceed 25%, states the report, therefore the House Price Index should be refined.

Short-term holiday rental is driving up prices and fostering investors to treat housing as a tradable asset rather than a human right. A regulatory framework for holiday rental, at European level, encouraging transparency and information, is highly recommended.
Over indebtment due to high housing prices has raised, affecting 80 million people. Over 10% of European population spend more than 40% of their income in housing.

With this data, the report states, an integrated European strategy would allow ensuring the access to decent housing, putting people at the centre of investment and recovery policies over the next decade.