With a view to contributing to the improvement of the implementation of European Structural and Investment Funds (ESI Funds) to promote the social inclusion, equal opportunities and non-discrimination of the Roma population, the meeting aimed to: 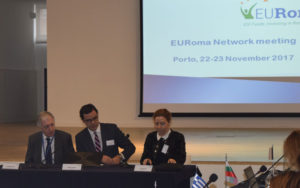 In his capacity of Director, Mr. António Tavares welcomed participants to the Santa Casa de Misericórdia do Porto, an organisation dedicated to social solidarity, where the meeting was hosted. Mrs. Ana Sampaio, of the Executive Committee of the Management Authority of the Portuguese Employment and Social Inclusion Operational Programme (POISE) (the programme that includes the most relevant actions related to Roma inclusion), and Mr. Pedro Calado, High Commissioner for Migration (Portuguese National Roma Contact Point), were in charge of opening the meeting on behalf of the Portuguese Network partners.

They shared with participants some initial ideas on the role of their respective organisations as well as on the Portuguese context as regards the situation of Roma population and the initiatives aimed at Roma inclusion. More detailed information on the Portuguese context was provided the day after as part of the ‘Portuguese country monograph’. As Mr. Calado pointed out, although much progress has been made since the Portuguese National Roma Integration Strategy (NRIS) was launched in 2013, it is necessary to fast track integration in order to make sure that no more generations are lost. To this end, ESF future programming has to be fostered in Portugal with a view to moving faster together. 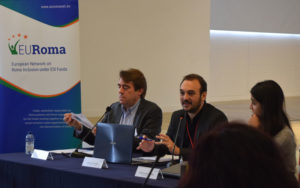 Setting the context for action: What is happening in the EU Framework as regards Roma inclusion and ESI Funds?

As in previous meetings, a session was devoted to reviewing relevant EU developments as regards ESI Funds and Roma inclusion with a view to better understanding and be up-to-date on the general EU framework for action and looking for possible synergies and complementarities between the work of the Network and the EU agenda.

European Commission (Directorate-General (DG) Employment, Social Affairs and Inclusion) representatives Mr. Dominique Bé, dealing with the policy side of Roma inclusion, and Ms. Jessica Vilela Hansraj, of the Portuguese Geographical Desk, and the EURoma Technical Secretariat were in charge of providing participants with information about initiatives carried out by DG Employment and DG Justice as well as by the European Parliament, notably:

In addition, the main outcomes of a number of specific initiatives gathering the views and experiences of actors trying to use EU Funds or involve Roma people at local level were presented. 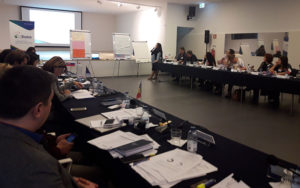 Through the use of interactive methodologies, participants had the opportunity to share knowledge and experiences on these topics based on their respective national contexts.

EURoma Technical Secretariat shared with participants a number of activities that are being developed building upon the work plan discussed and agreed at the first EURoma meeting, including: 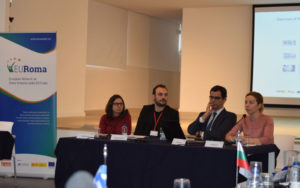 Looking at the Portuguese context

The second day of the meeting was devoted to analyse the Portuguese context as regards policies and ESI Funds aimed at promoting social inclusion, equal opportunities and non-discrimination of the Roma population building upon the presentations made by Portuguese Network partners.

Mr. Pedro Calado (High Commissioner for Migration and National Roma Contact Point) set the context by presenting the situation of Roma population in Portugal. Mrs. Marisa Horta (of the Roma Communities Support Unit of the High Commission for Migration/NRCP) and Mrs. Ana Sampaio (of the ESF Social Inclusion and Employment Operational Programme, POISE) then shared information with participants on the implementation of the Portuguese NRIS and the POISE, which includes the main actions aimed at Roma social inclusion.

Following the presentation of the general context, a number of initiatives, funded by ESI Funds and by other funding sources, were presented. These presentations were aimed to contribute to the exchange of experiences among partners and to identify elements of relevance for interventions aimed at Roma inclusion to be successful.

Initiatives shared were as follows: