Framed in its commitment with equal opportunities and fight against all forms of discrimination, the Portuguese Presidency has undertaken different actions and events of relevance for Roma inclusion and equality. One of the key ones is the Porto Social Summit and the agreed Porto Social Commitment.

The Summit aimed at setting the European agenda for the next decade and ensuring that Europe faces the challenges of the present and of the future leaving no one behind. To this end, it sought to reinforce the commitment from Member States, European institutions, social partners and civil society to the implementation of the recently adopted Euroopean Pillar of Social Rights Action Plan and in particular its three main targets for 2030 proposed in this plan, to which all partners in the Summit committed:

This document calls on the ambition of the national targets to achieve the European goals; the need to properly assess the progress through the Social Scoreboard; and stresses the importance of the citizenry participation, involving social partners and mobilizing the European society. The Commitment makes specific reference to actions that will directly involve Roma people, as one of the most vulnerable, excluded and discriminated minorities in Europe. For example:

Portugal took over the Presidency of the Council of the European Union in January this year, following in the Presidency Trio to Germany and preceding Slovenia’s Presidency. The motto in this period is ‘Time to deliver: a fair, green and digital recovery’, and focuses on three main priorities: 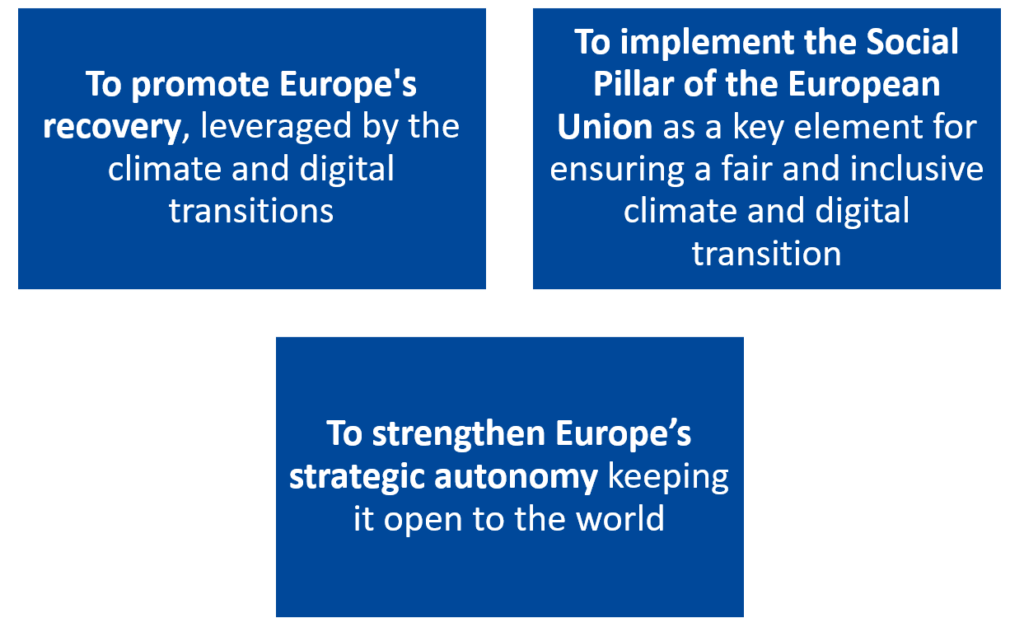 These priorities are organised through 5 lines of action, regarding a resilient, green, digital, social and global Europe.

In order to recover from the crisis and lay the foundations for sustainable growth and job creation, one of the goals of this regarding the financial aspect, is to start execution of the new Multiannual Financial Framework (MFF) and the EU Next Generation Instrument (Next Generation EU) and the respective Recovery and Resilience Facility (RRF). Related to this topic, the Portuguese Presidency approved the RRF on February, and the legislative package regulating the more than 330 billion euros for the Cohesion Funds, on March. The RRF is considered “the main pillar of the European recovery plan, Next Generation EU, designed to provide financial aid to Member States in order to combat the economic and social effects of the COVID-19 pandemic and make the European economy more resistant to future shocks”, while the Cohesion Funds “will finance projects ranging from sustainable mobility, hospitals and healthcare, clean energy, climate change, water and waste management, sustainable urban development, research, competitiveness, innovation and digitisation and the circular economy, to job creation, promotion of social inclusion and also education and training”.

The Portuguese Presidency will organise a high-level conference on recovery, in Lisbon at 21 June, to discuss the economic and financial situation, taking into account the national recovery and resilience plans.

Over the last months, the Portuguese Presidency of the Council of the European Union has organised several events and conferences regarding key issues of interest for the Roma population in the EU. These events are framed in the Portuguese Presidency’s commitment with equal opportunities and fight against all forms of discrimination, defined in its Programme as “Promoting equal opportunities and combating all forms of discrimination based on sex, race, colour, ethnic or social origin, genetic features, language, religion or belief, political or any other opinion, membership of a national minority, birth, disability, age or sexual orientation will be cross-cutting priorities”.

The Portuguese Presidency of the Council of the EU finishes at July 2021, when Slovenia will take over the presidency until the end of the year.