Hosted by the Spanish ESF Managing Authority, the meeting aimed to identify the main challenges for the implementation phase and review how transnational cooperation and the EURoma Network could help Member States to address them.

The EURoma Network held its last meeting of the 2007-2013 programming period on 23rd and 24th November 2015 in Madrid, hosted by the Spanish partners. The meeting took place in a crucial moment: now that the negotiations between the European Commission and the Member States about the Operational Programmes (OPs) are concluded or at their final stage, it is time to move from planning to implementation. In this context, the meeting aimed to:

The meeting brought together representatives from the Managing Authorities, mainly European Social Fund (ESF), and the National Roma Contact Points (NRCPs) from eleven countries, as well as representatives of the European Commission, and the EU Fundamental Rights Agency (FRA), in addition to the EURoma Technical Secretariat (held by the Fundación Secretariado Gitano).

They first reviewed the work of the Network since it was launched in 2007 by the Spanish ESF Managing Authority, in cooperation with the Fundación Secretariado Gitano, highlighting what they considered the most relevant achievements at EU and national levels. They then looked at the future, identifying the main challenges and opportunities of the current frameworks on Roma inclusion and ESI Funds and the potential role of the Network in this context. They all stressed the value of the Network, which has showed the path to be followed as regards the use of Structural Funds for Roma inclusion, and their trust in the continuation of the common work within the Network in the 2014-2020 programming period. 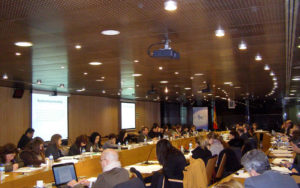 Following the welcoming words, Ms. Carolina Fernández of the EURoma Technical Secretariat, briefly presented the meeting’s agenda and the main topics to be discussed.

This last partners’ meeting of the 2007-2013 programming period also offered an excellent opportunity to take stock of the eight years of work of the Network and assess its impact and value. Ms. Fernández started by presenting key elements related to the Network’s activities, namely:

She then shared some ideas pointed out by EURoma partners and other stakeholders as regards the value and the impact of the Network. For more information, see presentation on overview of Network activities and achievements 2008-2015

Following this presentation, representatives from different partner countries shared their views on what the involvement in the Network meant for them and their organisations. They all agreed on the value of the Network and the positive contribution that it had brought to their work and the context in which they are working. In this sense, they expressed their willingness to continue working together in the context of the Network.

European Commission representatives also recognised the value and usefulness of the EURoma Network, a good example of transnational cooperation. They pointed to some elements that they consider positive such as the Network’s ability to identify and address relevant issues for Roma inclusion before they are on the agenda (e.g. the importance of the local level); its innovation by bringing together the policy (NRCPs) and the funding side (MAs); its capacity to “translate” the technical EU jargon on ESI Funds and Roma inclusion in operational ways and bring it closer to relevant stakeholders; and its stability (i.e. it is the only Network funded by a country which has been active for so long, thanks to conviction of the Spanish ESF National Authority and the support of the Network Technical Secretariat).

EU Framework: Relevant developments as regards Roma inclusion and how to create synergies for a better use of ESI Funds

An important part of the meeting was dedicated to analysing the EU Framework and the recent developments regarding ESI Funds and Roma inclusion with the objective of better understanding the context and looking for possible synergies and complementarities between the political developments and the use of ESI Funds.

Mr. Dominique Bé, of the Unit of Social Inclusion and Poverty Reduction of the European Commission (DG Employment, Social Affairs and Inclusion) was in charge of providing participants with information about initiatives carried out by DG Employment and DG Justice, notably:

Following the presentation and discussion on these initiatives, a video of Member of the European Parliament Terry Reintke, rapporteur of the Resolution on “Cohesion Policy and marginalized communities” was broadcasted. The report, drafted at the proposal of the Committee of Regional Development, was adopted by the plenary of the European Parliament on 24th November 2015. EURoma has contributed to the report by sharing its experience and providing feedback on the draft versions of the document (for more information about the report, see news item).

Setting the context for action in the 2014-2020 programming period: how is Roma inclusion considered in OPs

Over the last years, the EURoma Network has been closely following the planning process of 2014-2020 programming, identifying and addressing with partners crucial elements to be considered to ensure that the full potential of ESI Funds for Roma inclusion will be used in the next programming period.

Two complementary presentations set the context and served as the starting point of the subsequent discussion between participants:

Teresa Epalza, from the European Commission (DG Employment, Social Affairs and Equality), presented the provisional information (until summer 2015) at the disposal of the European Commission services, focusing on IP 9.2. According to this information, 5 billion of the ESF total budget has been allocated to IP 9.2., which is addressed in 35 OPs from 13 Member States (representing approximately 50% of the estimated Roma population).

In addition 14 Member States have ex ante conditionalities on Roma inclusion; 9 of them had fulfilled this conditionality before the PA/OP adoption, while the remaining 5 have submitted action plans to ensure their fulfillment by the end of 2016 at the latest.

Ms. Epalza also presented participants the general context for action in the 2014-2020 programming period and the policy framework on ESF and Roma inclusion.

Marta Hernandez, from the EURoma Technical Secretariat, presented an analysis of the preliminary findings of the process of gathering of information carried out by the Technical Secretariat in cooperation with partner countries over the last months. This exercise aims to take stock of how Roma inclusion has been considered in the Partnership Agreements and Operational Programmes of partner countries, both under investment priority 9.2. as well as under other investment priorities (both under thematic objective 9 and other thematic objectives).

The preliminary analysis of the Operational Programmes reviewed aspects such:

While the information available is still preliminary (subject to the adoption of the last OPs) and there are therefore some limitations in the analysis, the data provided in both presentations allowed to have a global picture of the general trends as well as to identify areas where particular attention should be paid in the implementation phase. The analysis by the EURoma Technical Secretariat will be finalized in the coming weeks and will feed in a final EURoma report to be released by the beginning of 2016.

Following the presentations on the general framework for action and the state-of-play, participants shared further information on the situation in their respective countries and discussed on the main outcomes of the analysis presented by the European Commission and the Technical Secretariat. 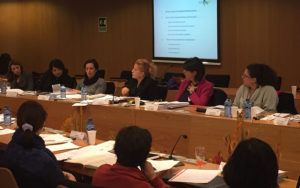 Following the review of the context for action in the 2014-2020 programming period, participants focused on the implementation phase, which most countries are currently starting. Partner countries shared information on the situation in their countries focusing on:

Future of the EURoma Network in the 2014-2020 programming period

One of the main objectives of the meeting was to jointly discuss the future of the Network. Belén Sánchez-Rubio of the EURoma Technical Secretariat presented a number of proposals building upon the ideas raised by partners and other relevant stakeholders in the context of the Network assessment made in 2014 and subsequent bilateral contacts and discussions. Ms. Sánchez presentation focused on:

The ideas and proposals presented served as basis of discussion between participants, who welcomed holding the discussion on the future of the Network at this stage, prior to the presentation of any proposal, in order to ensure that it meets their specific needs and expectations. The complementarity between the common European Commission framework on transnationality and the future EURoma Network were addressed in a separate session (see below).

The role of transnational cooperation in the 2014-2020 programming period

Teresa Epalza from the European Commission (DG Employment, Social Affairs and Equality) shared with participants information on how transnational cooperation is foreseen in the 2014-2020 programming period, focusing on how it could be used in practice by partners, in particular for initiatives of mutual learning such as the EURoma Network.

Transnational cooperation is a crucial element of the 2014-2020 programming period, not only because it has been reinforced, even becoming, contrary to the 2007-2013 programming period, mandatory at national level, but also, and mainly, because it offers a lot of possibilities for Member States to take part in transnational initiatives and exchange and share experiences.

In addition to the opportunities at national level (based on article 10 of ESF Regulation), the EU level offers complementary ways to promote transnationality. Following the increased role given to the European Commission, which should facilitate transnational cooperation on common themes, a common EU framework for transnational cooperation has been put in place. It includes different elements such as a number of thematic networks addressing common themes such as employment, social inclusion, social economy or partnership, or a number of IT instruments (EU level partners search database focusing on project proposals or a central EU level website). The importance of ensuring that these opportunities at EU level consider and are complementary to existing initiatives such as the EURoma Network was stressed.

Following the general presentation, participants shared how transnational cooperation is envisaged in their national OPs and how activities related to Roma issues, and future cooperation in this area, are considered.

Belén Sánchez-Rubio from the EURoma Technical Secretariat closed the meeting recalling the main conclusion of the meeting: a lot of progress is witnessed in relation to the 2007-2013 programming period; the challenge now is to translate this progress into actions with a real impact in the implementation phase. As pointed by participants, a number of challenges should be faced to achieve this goal and initiatives such as the EURoma Network could play an important role to help Member States address them.

EURoma will release a final product – the final EURoma report- which will provide an overview of EURoma activities during the 2007-2013 programming period as well as an analysis of the state-of-play of the Operational Programmes in the partner countries in the 2014-2020 programming period.

Ms. Sánchez-Rubio finalized by thanking EURoma partners as well as European Commission and FRA representatives for their participation and contributions in the meeting, as well as for their continuous support for the development of the Network activities.